﻿ Hot cars can result in death for people, pets | deyuchuju.com

Hot cars can result in death for people, pets 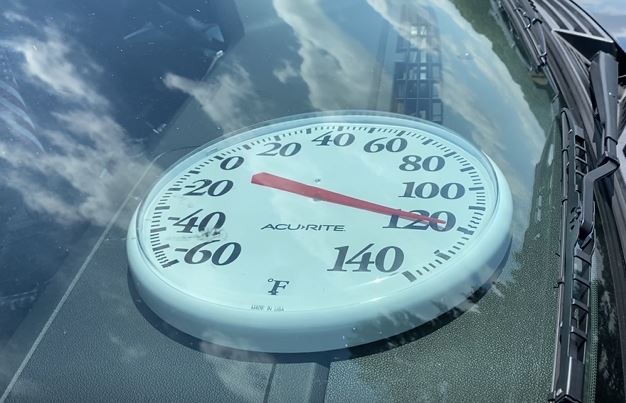 A thermometer sitting on the dash of a vehicle shows hot dangerously hot the inside can get when the vehicle is parked facing the sun.
Contact Editor

CLARKESVILLE – Temperatures are just approaching summertime levels across North Georgia, but Habersham County public safety officials remind drivers tragedy can occur in a matter of minutes in a hot vehicle, even in cooler weather.

“We took a thermometer and put in one of our vehicles,” Black said. “It was 79 degrees and within 10 minutes it jumped to over 100, to 104, which is right in that range that can kill a child or an animal. Even running, it’s not wise to leave anything in a vehicle.”

But the temperature didn’t stop there.

“Within 20-25 minutes, it had jumped up to about 120 degrees,” Black said. “Nobody – animal, child or adult – nobody can survive in that kind of heat. Actually, it can be 56 degrees outside, but a vehicle sitting in the sun can get to those 104 or 107 degrees that can be catastrophic for human life or animal life.”

A digital “heat gun” thermometer used by animal control showed the temperature on the dashboard of the vehicle at 139 degrees, well above the fatal range. Moments later, two checks with the same device showed the inside temperature at 146 degrees.

Terrell demonstrated how sheriff’s deputies use unlock kits to access vehicles where children or pets are in danger, or when keys have been locked in a vehicle.

Sometimes, hot car tragedies occur because parents forget to drop off an infant at daycare or other facilities.

Black said he learned recently that childcare facilities are willing to call a parent if a child is not dropped off on schedule to ask about the child’s whereabouts, suggesting parents take advantage of that option and other steps to ensure the safety of their most precious cargo.

Black and Terrell said another suggestion is for people to put items they normally carry into work, the gym, or other destinations in the back seat so they are sure to look back there before leaving the vehicle.

“Something you know you’ve got to get out of the car that’s going to make you go and look in that back seat,” Black said.

Another suggestion is child seat placement.

“Putting the child seat in the middle is not only protection against side impact from both sides, but it keeps them hopefully in your rearview mirror where you’re able to see them as well,” Black said.

Incidents of children left in vehicles happen more frequently than many people realize.

“We respond to quite a few calls with kids left in hot cars,” Terrell said.

Those cases often include the possibility of a tragic ending.

“It’s something that we don’t want to see happen,” Black said. “It averages about 39 a year across the United States. It’s the No. 1 cause of death for 14 and younger that’s not vehicle accident related as far as dying in vehicles from the hot sun.”

Officials said they know parents often make quick stops at stores or other facilities, not seeing the harm in leaving their child or children in the vehicle.

“I know it’s aggravating for parents to get children in and out of the car seat, but even if you’re stopping for two minutes at that store, it doesn’t matter,” Black said.

“Wake them up,” Terrell said.

“Get them out and take them inside,” Black said. “Not only because of the heat, but how many times do we turn on the TV and a car gets stolen and [the person stealing] ends up looking in the back and there’s a child in the back.”

Officials said parents must pay less attention to their cell phones and other distractions and focus on what is important.

“We’re coming out of the season where kids have been 凯发k8app下载home for months,” Terrell said. “We’re coming into summertime. We’re going to be moving back into the school season hopefully starting in August, so we’ll be carrying our kids to school and different things. We have to have our mind on what we’re doing.”

The threat created by hot cars is not limited to children and pets. Senior citizens also are vulnerable.

“As we get older, we tend to get cooler,” Terrell said. “My daddy is in his 80s and wears long-sleeve shirts all the time.”

Terrell likened an elderly person to a frog placed in a pot, saying if the water is heated gradually the frog does not realize what is happening. On the other hand, put a frog in hot water and it jumps out because it immediately recognizes a problem.

Officials said leaving senior citizens inside a vehicle with the windows up or only partially down and not running can have the same tragic results as leaving a child or a pet.

Pets left inside vehicles face extreme danger, even if they find a spot where they are out of direct sunlight, Nix said.

“Their tolerance for hot vehicles is extremely low,” Nix said. “The thing about it is they’re wearing a fur coat when they’re locked inside these vehicles. An animal within minutes of being locked inside a hot vehicle can reach heat stroke. The results of that can be deadly.”

This time of year, animal control officers spend a lot of their time responding to complaints of animals left inside a vehicle with the windows up or down only a few inches.

“We’ve responded to calls of that in the past with animals locked in vehicles which resulted in hospitalization and near-death experiences for that pet,” Nix said. “One of the big myths that we hear when people say it’s ok to leave their dog in the car is the windows are cracked. That vehicle is still creating a greenhouse effect with all that glass in there. Just having the windows cracked, even if it’s all four, really doesn’t make that big of a temperature difference whether they’re open or they’re closed. It’s just not safe.”

But looks can be deceiving in more ways than one when it comes to pets inside vehicles, especially modern vehicles.

“If you do happen to go somewhere and you see an animal locked in a vehicle, check to make sure it’s not running,” Nix said. “We do have a lot of new age vehicles. We responded to a call a few weeks ago that was a Tesla in Dog Mode, so thankfully the person that witnessed that didn’t immediately go smashing windows out. They called ities to come investigate.”

Nix said an animal in apparent distress should not be left unobserved.

“Sometimes it can take us a few minutes to get where we need to get to an animal in a vehicle, so there are things you can do to help protect that pet,” Nix said.

She said first, make sure the vehicle is not running with the air conditioner on. If it is not, then get the make, model, color and tag number of the vehicle and have someone stay with it while someone else goes into the store or other establishment to request an announcement for the owner to return to the vehicle.

An animal lover’s first instincts may be to take drastic action to protect the pet, but officials said that is not the best idea.

Nix shared a story about one instance where a bystander thought he or she saw a pet in severe distress inside a hot vehicle and took action without waiting for help.

“We have had somebody one time that smashed the window out of a vehicle because they didn’t feel that animal control could get there fast enough,” Nix said. “Response time was six minutes. When I arrived, that animal turned out in fact to be a wig that was laying in the back of somebody’s vehicle.”

Most years, there are a few stories around the nation about a law enforcement K-9 being left in a hot vehicle, resulting in serious illness or death.

In Habersham County, safeguards are in place on vehicles specially equipped to protect those four-legged deputies.

“We do leave it running all the time with the dog in it,” Terrell said. “But if something happened with the air conditioning or the car, we have what’s called a ‘hot pop’ system in it. It will roll the windows down and it turns the fan on. If the temperature gets above a certain level it actually opens the door and lets the dog out.”

Unlocked vehicles parked in a yard or other location can provide a dangerous hiding place, especially for very young children who may think it’s fun to get away from friends or family members.

In addition to providing an opportunity for someone to steal items from the vehicle, a child could hide inside undetected, resulting in tragedy.

“It’s nice and warm and the next thing you know they fall asleep and the worst can happen,” Terrell said. “It’s always good to keep your cars locked sitting at 凯发k8app下载home and take your valuables inside.”

Rob Moore Reporter
More Articles From Rob »
© Copyright 2021 deyuchuju.com
All rights reserved. This material may not be published, broadcast, rewritten, or redistributed without permission.