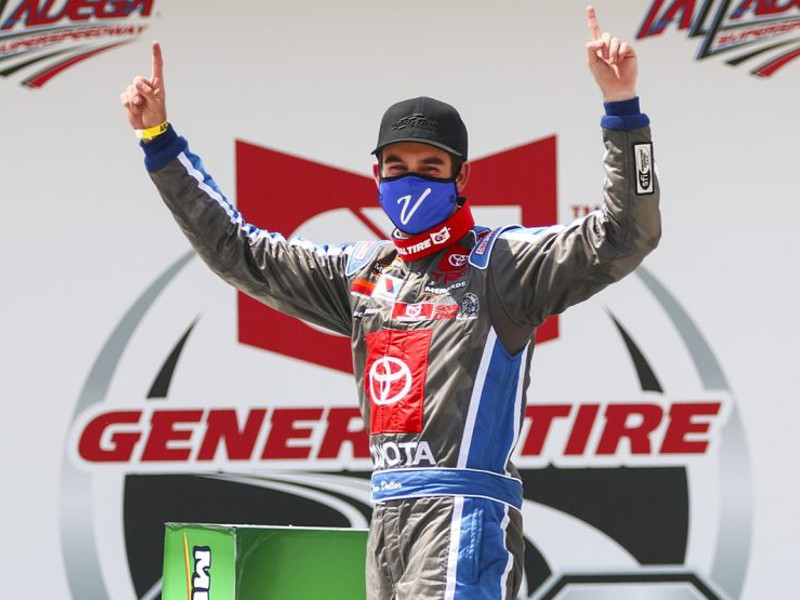 TALLADEGA, Ala. - Drew Dollar had the best view of the battle between race leaders Riley Herbst and Michael Self.

And when Self began to go around in a spin on the Talladega Superspeedway backstretch with two laps remaining, it was Dollar who was perfectly positioned.

The 19-year-old from Atlanta, Georgia took the high lane, avoided the wreck, and drove the No. 15 Toyota to his first career ARCA Menards Series victory Saturday in the General Tire 200 at Talladega.

“I definitely needed this one,” said Dollar. “The Venturini guys gave me the best car out here today. Had the best team, had the best spotter in the stands, Joe White. He guided me through. We lost a family member over the break, so it’s definitely an emotional one. And this one’s for him, I know he’s watching up above.”

Dollar edged Ryan Repko at the line by .115 seconds, as the Venturini Motorsports teammates held off third-place Bret Holmes on the final lap. Herbst finished fourth.

Dollar, who had a career-best finish of third at Daytona International Speedway in February, was making his fifth career series start. He also had a pair of fourth-place runs over nine races in the East and West series last year.

The race finished under green in large part to Self’s ability to get his car pointed in the right direction out of the spin. The championship points leader, Self took advantage of the large lead the front five cars had built up in drafting to hang on to a fifth-place finish.